The History Of The Ratahi

Jerry Williams was probably Tauranga’s first charter fishing boat skipper. For years he plied his trade around Tauranga Harbour delivering goods and transporting passengers on the shallow draught vessel the Omokoroa. In the early 1920’[s he had traded in his Auckland house to buy the vessel.

The railway line running down the coast from Katikati finally reached Tauranga in 1927 so Jerry started ferrying goods and people from Matakana island. He took any job he could. Some of the Tauranga residents suggested Jerry could take them out on the harbour fishing. He agreed provided they only kept three fish each and gave the rest to him to cover his expenses.

The outing proved successful and Jerry, after another trip was suggested, upped the price to two shillings and sixpence per person and they could keep six fish each. The trip was a great success although Jerry suspected from the grins on the fishermen’s faces and the weight of the sacks they carried off the boat that their catches far exceeded the specified number!

News of the trips spread and when he was again approached he charged each fisherman five bob and said “you can keep the bloody fish”. It soon became a regular and most profitable business for Jerry, who for years did not have to travel far to the best fishing grounds in the harbour. With the passing years and the advent of commercial fishing, it became necessary to travel out of the harbour to new grounds. The Two and a Half Mile and the Five Mile reefs provided excellent sport and Jerry a steady income for a few more years.

The Omokoroa was never designed for fishing and Jerry saw the opportunity to build a new boat of his own design that would be fit for purpose. He commissioned the O’Rourke Brothers in Auckland to build his new boat. His specifications were simple, 46 foot in length, fifteen foot beam and a three foot draft. High bulwarks, a permanent awning to give cover from sun and rain and most importantly a toilet. The boat was built bit by bit after a down payment of 200 pounds. Jerry sent ongoing payments when he could and the O’Roukes would buy a few pieces of kauri and add it to the hull. Eventually the boat was finished, a motor added and Tauranga had its first dedicated charter fishing boat. 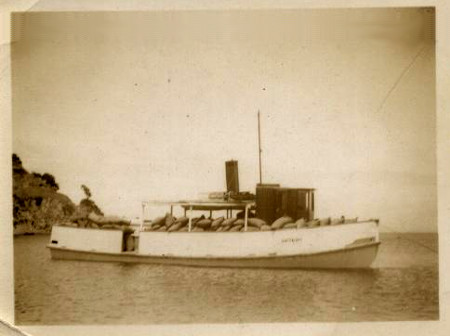 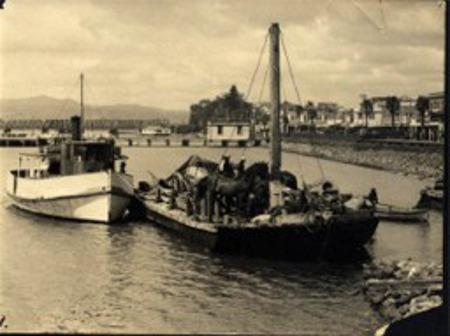 She arrived in Tauranga in September 1938 and tied up at Coronation Pier. Over the next few days an estimated 2000 people came to look over and admire her. The following Sunday was her inaugural fishing trip. Jerry had inserted an ad in the newspaper thinking he would build up business over time. To his surprise and delight he had a full complement of 100 paying passengers on that first trip, catching a total of 300 fish. I can only imagine what chaos one malevolent kahawai could have created on that very first trip.

When not fishing, the Ratahi was a very busy vessel collecting cream from up Hunter’s Creek, taking fertiliser up the Wairoa River and bringing wool out. The other jobs were barging sand from Matakana Island, collecting maize and even cattle from Motiti, taking rugby teams up to Katikati, dropping holiday makers onto Mayor Island and doing harbour cruises.

In 2019 she was restored to pristine condition ready for her new role taking passengers on cruises around the historic Manukau Harbour.

Just contact Trevor Pennington for more info or to make a booking.